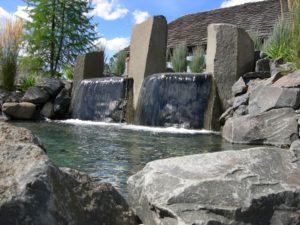 The Columbia Basin of eastern Washington is plastered with deep layers of a fine grained black rock known as basalt. The basalt is lava that cooled and hardened after it flooded over the landscape. These astounding lava floods occurred on a scale unequalled anywhere else on the entire planet.

When we think of lava flows, images of Hawaii’s volcanoes come to mind. Oozing red masses, capped with smudgy gray outer surfaces, slowly drizzle down mountainsides like streams of molasses. This provides exciting volcano footage for television documentaries. But the lava outflows from Hawaiian volcanoes rank as puny by comparison to the volumes of molten material that bubbled up from below the surface in the Pacific Northwest’s interior regions.

Lava began flowing in the Columbia Basin about 17 million years ago and continued until about 6 million years ago. In all, there may have been 300 individual outbreaks. Each lava flood was separated by thousands of years in which nothing happened.

The cumulative effect was staggering. By the time these eruptions ceased, most of the Columbia Basin was coated with basalt rock at least one mile thick. In the central and southern Yakima Valley the accumulated basalt measures three miles in depth.

Flows of the so-called “Columbia River Basalt Group” covered virtually all of Washington state east of the Cascades and south of a line roughly following the Spokane River, Lake Roosevelt, and the Columbia River from Grand Coulee Dam until the river makes its bend at Pateros. Streams of basalt lava carved a wide path through the Columbia Gorge region and then on to the Pacific Coast. The Oregon coastal shoreline contains remnants of these flows in such prominent features as Tillamook Head. Extensive areas of northeast Oregon also were covered. [Other basalt outbreaks blanket southeast Oregon and the Snake River Plain in Idaho.

The coverage area for Columbia River flood basalts exceeds 60,000 square miles. At least 50,000 cubic miles of basalt can be found within that area, and some estimates go as high as 90,000 cubic miles. The immense weight of this rock caused the Earth’s outer crust to depress and form the shallow basin that dominates the topography of eastern Washington.